Below is the Palestinian National Covenant, the official charter of the Palestine Liberation Organization (PLO). The text is the English version published officially by the PLO, unabridged and unedited.

Note, however, that the PLO's translation sometimes deviates from the original Arabic so as to be more palatable to Western readers. For example, in Article 15, the Arabic is translated as "the elimination of Zionism", whereas the correct translation is "the liquidation of the Zionist presence". The Zionist presence is a common Arabic euphemism for the State of Israel, so this clause in fact calls for the destruction of Israel, not just the end of Zionism.

Where subtleties in the original Arabic are important, the Arabic word has been inserted in parentheses.

THE PALESTINIAN NATIONAL CHARTER:
Resolutions of the Palestine National Council,July 1-17, 1968

Text of the Charter:

Article 2:Palestine, with the boundaries it had during the BritishMandate, is an indivisible territorial unit.

Article 3:The Palestinian Arab people possess the legal right to their homeland and have the right to determine their destiny after achievingthe liberation of their country in accordance with their wishes and entirely of their own accord and will.

Article 5:The Palestinians are those Arab nationals who, until 1947,normally resided in Palestine regardless of whether they were evicted from it or have stayed there. Anyone born, after that date, of a Palestinian father - whether inside Palestine or outside it - is also a Palestinian.

Article 6:The Jews who had normally resided in Palestine until thebeginning of the Zionist invasion will be considered Palestinians.

Article 7:That there is a Palestinian community and that it hasmaterial, spiritual, and historical connection with Palestine are indisputable facts. It is a national duty to bring up individualPalestinians in an Arab revolutionary manner. All means of information and education must be adopted in order to acquaint the Palestinian with his country in the most profound manner, both spiritual and material,that is possible. He must be prepared for the armed struggle and ready to sacrifice his wealth and his life in order to win back his homeland and bring about its liberation.

Article 8:The phase in their history, through which the Palestinian people are now living, is that of national (watani)struggle for the liberation of Palestine. Thus the conflicts among the Palestinian national forces are secondary, and should be ended for the sake of the basic conflict that exists between the forces of Zionism and of imperialism on the one hand, and the Palestinian Arab people on theother. On this basis the Palestinian masses, regardless of whether theyare residing in the national homeland or in diaspora (mahajir)constitute - both their organizations and the individuals - one national front working for the retrieval of Palestine and its liberation througharmed struggle.

Article 9:Armed struggle is the only way to liberate Palestine. Thus itis the overall strategy, not merely a tactical phase. The Palestinian Arab people assert their absolute determination and firm resolution to continue their armed struggle and to work for an armed popular revolution for the liberation of their country and their return to it.They also assert their right to normal life in Palestine and to exercisetheir right to self-determination and sovereignty over it.

Article 12:The Palestinian people believe in Arab unity. In order to contribute their share toward the attainment of that objective, however, they must, at the present stage of their struggle, safeguard their Palestinian identity and develop their consciousness of that identity, and oppose any plan that may dissolve or impair it.

Article 15:The liberation of Palestine, from an Arab viewpoint, is a national (qawmi) duty and it attempts to repel the Zionist and imperialist aggression against the Arab homeland, and aims at the elimination of Zionism in Palestine. Absolute responsibility for thisfalls upon the Arab nation - peoples and governments - with the Arabpeople of Palestine in the vanguard. Accordingly, the Arab nation mustmobilize all its military, human, moral, and spiritual capabilities to participate actively with the Palestinian people in the liberation of Palestine. It must, particularly in the phase of the armed Palestinian revolution, offer and furnish the Palestinian people with all possible help, and material and human support, and make available to them the means and opportunities that will enable them to continue to carry out their leading role in the armed revolution, until they liberate their homeland.

Article 16:The liberation of Palestine, from a spiritual point of view, will provide the Holy Land with an atmosphere of safety and tranquility, which in turn will safeguard the country's religious sanctuaries and guarantee freedom of worship and of visit to all, without discrimination of race, color, language, or religion. Accordingly, the people of Palestine look to all spiritual forces in the world for support.

Article 17:The liberation of Palestine, from a human point of view,will restore to the Palestinian individual his dignity, pride, and freedom. Accordingly the Palestinian Arab people look forward to the support of all those who believe in the dignity of man and his freedomin the world.

Article 18:The liberation of Palestine, from an international point ofview, is a defensive action necessitated by the demands of self-defense. Accordingly the Palestinian people, desirous as they are of the friendship of all people, look to freedom-loving, and peace-lovingstates for support in order to restore their legitimate rights in Palestine, to re-establish peace and security in the country, and toenable its people to exercise national sovereignty and freedom.

Article 19:The partition of Palestine in 1947 and the establishment of the state of Israel are entirely illegal, regardless of the passage of time, because they were contrary to the will of the Palestinian people and to their natural right in their homeland, and inconsistent with the principles embodied in the Charter of the United Nations, particularly the right to self-determination.

Article 20:The Balfour Declaration, the Mandate for Palestine, and everything that has been based upon them, are deemed null and void.Claims of historical or religious ties of Jews with Palestine are incompatible with the facts of history and the true conception of what constitutes statehood. Judaism, being a religion, is not an independent nationality. Nor do Jews constitute a single nation with an identity of its own; they are citizens of the states to which they belong.

Article 21:The Arab Palestinian people, expressing themselves by thearmed Palestinian revolution, reject all solutions which are substitutes for the total liberation of Palestine and reject all proposals aiming at the liquidation of the Palestinian problem, or its internationalization.

Article 22:Zionism is a political movement organically associated with international imperialism and antagonistic to all action for liberation and to progressive movements in the world. It is racist and fanatic in its nature, aggressive, expansionist, and colonial in its aims, and fascist in its methods. Israel is the instrument of the Zionist movement, and geographical base for world imperialism placed strategically in the midst of the Arab homeland to combat the hopes of the Arab nation for liberation, unity, and progress. Israel is a constant source of threat vis-a-vis peace in the Middle East and the whole world. Since the liberation of Palestine will destroy the Zionistand imperialist presence and will contribute to the establishment of peace in the Middle East, the Palestinian people look for the support of all the progressive and peaceful forces and urge them all, irrespective of their affiliations and beliefs, to offer the Palestinian people all aid and support in their just struggle for the liberation of their homeland.

Article 23:The demand of security and peace, as well as the demand ofright and justice, require all states to consider Zionism an illegitimate movement, to outlaw its existence, and to ban its operations, in order that friendly relations among peoples may be preserved, and the loyalty of citizens to their respective homelands safeguarded.

Article 24:The Palestinian people believe in the principles of justice, freedom, sovereignty, self-determination, human dignity, and in the right of all peoples to exercise them.

Article 25:For the realization of the goals of this Charter and its principles, the Palestine Liberation Organization will perform its rolein the liberation of Palestine in accordance with the Constitution of this Organization.

Article 26:The Palestine Liberation Organization, representative of the Palestinian revolutionary forces, is responsible for the Palestinian Arab people's movement in its struggle - to retrieve its homeland,liberate and return to it and exercise the right to self-determinationin it - in all military, political, and financial fields and also for whatever may be required by the Palestine case on the inter-Arab and international levels.

Article 27:The Palestine Liberation Organization shall cooperate with all Arab states, each according to its potentialities; and will adopt aneutral policy among them in the light of the requirements of the war of liberation; and on this basis it shall not interfere in the internalaffairs of any Arab state.

Article 28:The Palestinian Arab people assert the genuineness and independence of their national (wataniyya)revolution and reject all forms of intervention, trusteeship, and subordination.

Article 30:Fighters and carriers of arms in the war of liberation are the nucleus of the popular army which will be the protective force forthe gains of the Palestinian Arab people.

Article 31:The Organization shall have a flag, an oath of allegiance,and an anthem. All this shall be decided upon in accordance with aspecial regulation.

Article 32:Regulations, which shall be known as the Constitution of the Palestinian Liberation Organization, shall be annexed to this Charter. It will lay down the manner in which the Organization, and its organs and institutions, shall be constituted; the respective competence of each; and the requirements of its obligation under the Charter.

Article 33:This Charter shall not be amended save by [vote of] amajority of two-thirds of the total membership of the National Congressof the Palestine Liberation Organization [taken] at a special sessionconvened for that purpose. 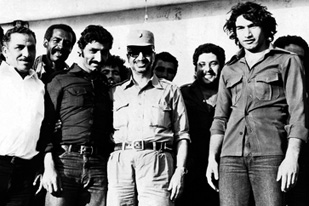